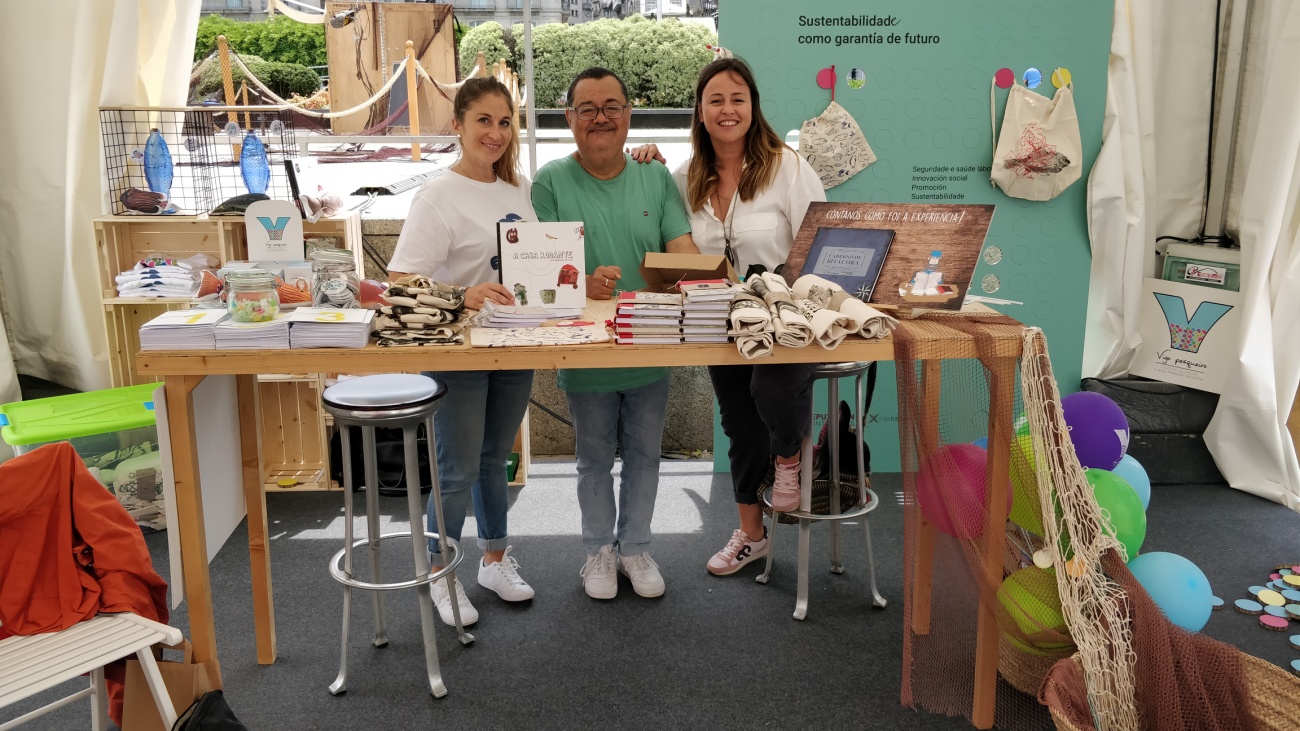 The first weekend of July , We have just finished a new edition of “Vigo Sea Fest. Festival ARVI do peixe ” with a happy heart and a full belly

From “Vigo Pesqueiro” Program that is launched by “Fundamar” (Fishing and Shellfish Foundation), during these four days we offered a varied tasty menu of the activities that we have throughout the year.

On Thursday, we inaugurated the activities with the visit to the seafood market, from where the auction performs at 15.30 in the afternoon; there we met all the operation of the sale and auction of the best seafood in the world.

Next, we continued on a panoramic tour in the facilities of the fishing port, the Berbés, to learn a little more about the world of fishing and its relationship with the origin of the city with the activity “On Foot, from the current port to the port of origin”.

We visited the current facilities, the “Market” and the “Auction”, we approached the fleet, we talked about fishing gear, the shipowners cooperative, the marketers, and then , we went to the original port in the “Ribeira do Berbés”, documented fishing port since the Middle Ages, now with arcades that no longer bathe the sea; From there we continued along Real Street, visiting the “Casco Vello” (Old Town) where the main fish markets were: the one of the Oysters, in the current Pescadería street, still active, which rivalled against the main fish market that was in the current “Princesa” Square.

Finally, we went looking for sea and fish, and we arrived at the “Vigo Sea Fest” where our route ended.

The next day, at 6.45 am, we met the group of the “early Vigo Pesqueiros” to get up close to one of the most picturesque activities that takes place in the city of Vigo: the fish market and the auction.

Since the beginning of the year, there was a change in the disposition of the merchandise; In the first building there is the “second sale” and then the second building is dedicated to “first sale”

Although the auction starts at 5.00, and almost all the fish had already been sold, the pace was frantic, and we could even observe how prices were sung and lowered quickly in the “corro” where fantastic monkfish specimens were auctioned, arrived from the “Gran Sol” Bank.

To continue opening our mouths before going to cover the festival, with the following activity we went to the Seafood Farm, where they explained perfectly how it works, how these nutritious species are preserved in the fresh and frozen chambers;

We were able to see how shipments are made and prepared … and best of all! They showed us the pools, the “SPA” where we visited those tasty and nutritious small red crabs, lobsters, spider crab and learned a lot of curiosities about all these species. Avant-gard and tradition go hand in hand in this seafood farm. Do you know that you can even order seafood at home?

After all the morning of visits, first at the fish market, and then at the seafood farm, the next stop would be at the Festival, to taste the best selection of seafood, accompanied by good music.

It is said that in Vigo we can live closely the entire fishing process, so visiting a shipyard was mandatory. There, they told us a lot of curiosities and information about the construction and naval repair, as well as its evolution, of which our city was the protagonist.

There is no doubt that our sea is full of life, refuge for nutritious species, tasty and for its quality, much appreciated throughout the world; but it also has a very valuable industrial heritage, because here the industry reached us from the sea, and that is why the “Browse Industrial Heritage” was the perfect closure for Friday’s day.

On Saturday we started the activities with the shellfish makers at “Peña do Cabrón” beach just below the “Faro da Guía”, with them we participate in an activity known as “rareo” that consists of moving the small clam from one point to another from the beach, where they will continue with their growth process.

And while some “Vigo Pesqueiros” were dedicated to shellfish on the coast, other “Vigo Pesqueiro” friends were embarking on the high seas, in the “Gran Sol” fishing grounds, rich in hake, but also in rooster and monkfish. As a curiosity, the ship that we visited is the only one in the fleet of the port that has wineries, which are worth both to preserve fresh species and freeze them.

We continue with the programming, and enjoy one more afternoon of a tour of the Ria, a “Browse Industrial Heritage” in the direction of San Simón island; we talked about sardines, minerals, and many stories of the “Sea of ​​Vigo”, telling this time with the interpretation of the explanation in LSE (Spanish sign language), thanks to the collaboration of the association “Xoga” the secrets of Industrial heritage of our estuary reached both deaf people and listeners who participated in the crossing.

As the poet Manuel Antonio wrote in the poem “Lecer”:

“Vigo está tan lonxe que se desourentaron as cartas mariñas”  ( “Vigo is so far that the maritime charts were discouraged”)  . There is a line from” De Catro a Catro”, one of the most representative books of the Galician and international avant-garde.

The “poet of the sea” was the protagonist of the “Fundamar” stand in this edition, and for that reason it was the meeting point for the activity “Percorre, Vigo Pesqueiro nas artes”( “Vigo is so far that the maritime charts were discouraged”   . There is a line from” De Catro a Catro”, one of the most representative books of the Galician and international avant-garde.

The “poet of the sea” was the protagonist of the “Fundamar” stand in this edition, and for that reason it was the meeting point for the activity “Percorre, Vigo Pesqueiro nas artes”;

This time it was not the fishing gear that was the protagonists, but the poetry of Manuel Antonio, the literature of Jules Verne, the sculptures of the sea of ​​Camilo Nogueira or many other pieces found in the Art Gallery which would be the last stop of this activity.

On the first day of the “Vigo Sea Fest” we inaugurated the activities with a “On Foot, from the current port to the port of origin”, and to end the festival, we moved with the visit to “Salinae” even more to the origin, soaking up the incredible stories of the first industrious of our estuary “the Romans”; visiting the only old salt mine of the entire Roman Empire that was preserved and with a musealisation.

We cannot forget the visits to the “Maritime Rescue Ship” with its necessary actions at sea. Thus we finished one more edition with the activities “Vigo Pesqueiro” within this “Festival ARVI do Peixe”.

Infinite thanks to all the participants who made it possible and of course to the collaborators who shared with us their knowledge: to the brotherhood, to the port authority, to the shellfish makers of Vigo, to fish and shellfish from Galicia (Vivero López Novoa) , to the marine rescue team, to the owners of the vessel “Peixemar dos”, to the salt flats and to the “Xoga” and APAMP associations.

You are all welcome next year. Hope to see you then!